How to deal with project overrun 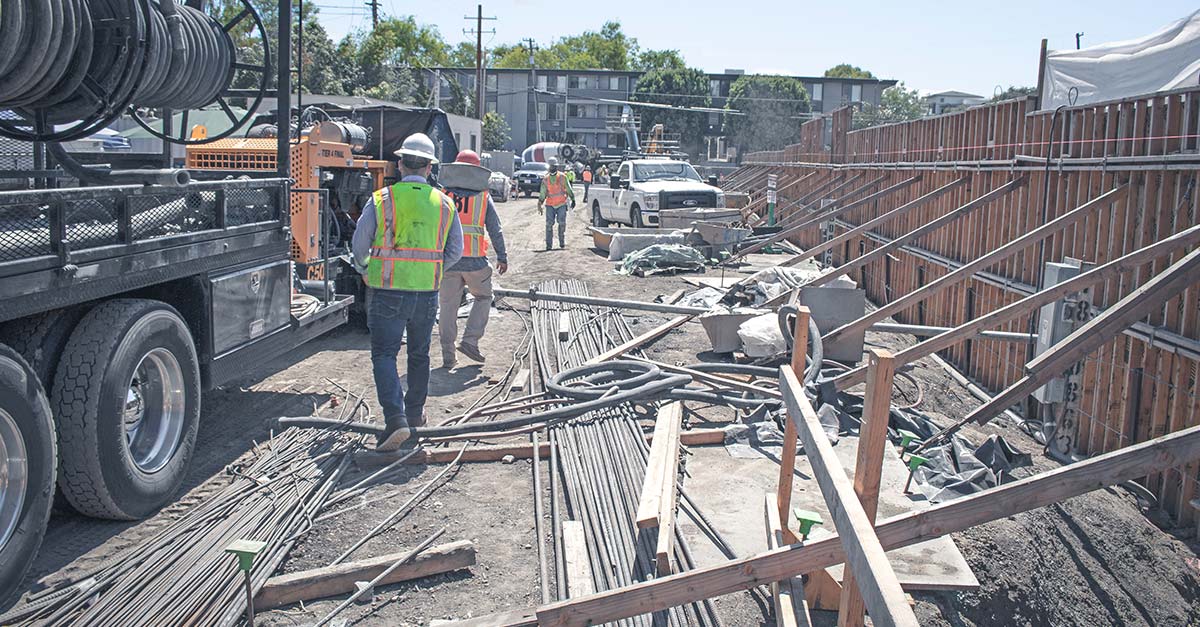 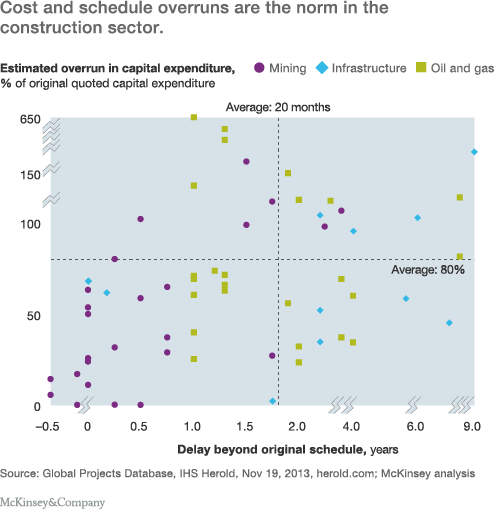 Cost and schedule overruns can be attributed to factors such as the labor shortage in construction, but also the result of the industry’s overarching inefficiency and lagging productivity. Here are four specific reasons why construction projects run over-budget and over-schedule as well as how to deal with project cost overruns.

With so much going on, it is tempting as a project owner to want to rush the initial planning so general contractors and specialty contractors can get to the real work. However, that first step is the foundation for the next several months (or years) of hard work. It’s extremely important to make sure even the smallest of details are carefully thought through so that everyone can do their part knowing exactly what is expected of them. Following Lean Construction methods, such as pull planning for scheduling, will keep workers accountable and projects moving as each task is dependent on another — thus reducing the potential for cost overrun.

Instead of being focused on efficiency, however, craftspeople are often focussed on savings due to the competitive nature of the bidding process creating pressure for delivering projects at lower prices. This deprioritizes time spent on important parts of the pre-planning process such as detail drawings and plan-checking, elevating the likelihood of mistakes. According to Construction Business Owner, a mistake discovered in the middle of a project could cost about 30 percent of the original project price to fix, and that increases to 80 percent when problems are discovered once the work is complete.

The takeaway? Be patient during the pre-construction phase. It’s better to ensure everything is planned out as much as possible so there are fewer mistakes. Once the budget of a project has been finalized, check it several times to make sure everything is accounted for. Taking these steps early greatly reduces the chances of budget overrun.

It’s no secret that labor inefficiency is a serious, common issue in construction. This is not primarily due to the industry’s labor shortage, but craftspeople not knowing what they are supposed to be doing. Another reason for labor inefficiency is that historically, all the paperwork, blueprints, and updates have been recorded using pen and paper and passed around manually or communicated in phone calls. A system like this is ripe with potential mistakes that lead to cost overruns.

Construction task management software like Fieldwire can help combat this inefficiency and make sure construction project owners are aware of—and have records of—everything happening onsite. From an iPhone, Android, iPad, or laptop, workers both on and off the field can view their plans offline and make changes to them from any device.

This ensures that everyone working on the project—general contractors, specialty contractors, designers, and project owners—receives the most up-to-date information in a timely manner. This matters most because time is money, and the average craftsperson currently spends only 30 percent of their day on “wrench time” doing the actual work in the field. The rest is spent on redundant tasks such as data entry, paperwork, and waiting for equipment; all of which contribute to cost overruns but can be avoided entirely with field management software. 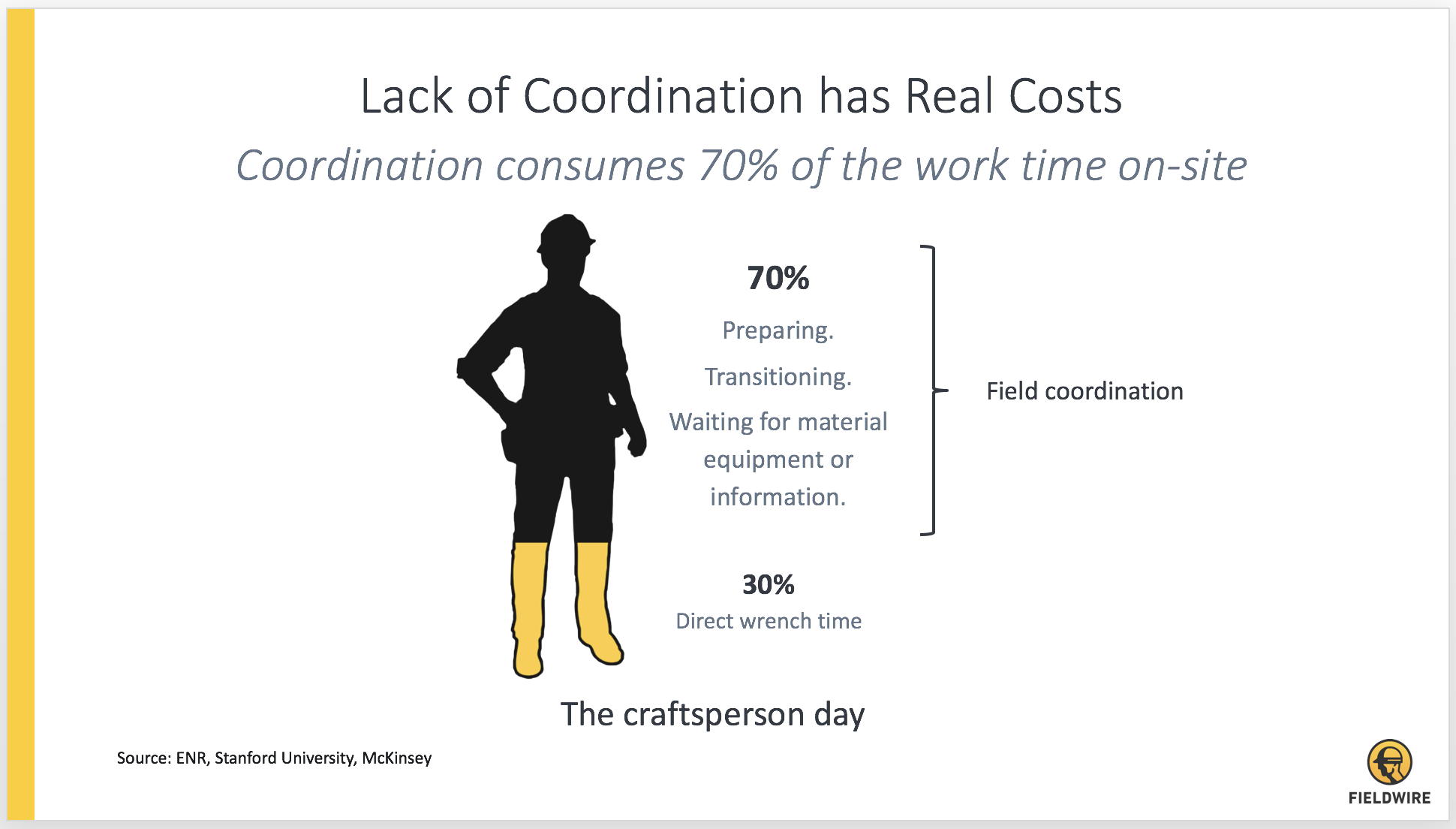 It doesn’t matter how much time and energy is invested into mapping out each detail of a project; setbacks are inevitable. The most frustrating part is that these complications could have nothing to do with human error. Instead, they could be the result of bad weather, unexpected factors in the environment, or even just a part or tool randomly malfunctioning or breaking down.

While these unexpected complications are — well — unexpected, they still need to be considered during the planning portion of the construction project. As the project owner, make sure general contractors have a contingency plan in place for scenarios such as bad weather. That includes buffering the contract and schedule a little to allow for any issues. It also means having the right equipment on hand—such as water pumps or large tarps— in case of a disaster.

Try to be patient with any changes to the schedule in order to accommodate factors such as bad weather. It’s better to reschedule than to have work done in impossible conditions when mistakes and injuries are much more likely to happen.

While (ideally) everyone on and off the field has extensive training, mistakes still happen; we’re human after all. But some mistakes are more costly than others. A mistake in budgeting could immediately throw the entire project off course. A safety incident in the field results in reverberating consequences throughout the project. An oversight discovered after construction often becomes extremely expensive. All of these are likely to result in construction cost overrun.

Fieldwire helps cut down on opportunities for miscommunication, which decreases the likelihood of mistakes. However, if one is made, Fieldwire can assist with its powerful issue tracking. Workers onsite can report issues—including photos, annotations, and comments—within Fieldwire’s construction management software and communicate them to the office team.

Construction cost overrun has become such an issue that KPMG reported that only 31 percent of project owners surveyed came within 10 percent of their original budget in the past three years. However, better preparation in the pre-construction phase, effective field management software, contingency plans, and quick recording of mistakes is how to deal with project cost overrun. More importantly, this will help decrease the likelihood of your next project going over-budget or over-schedule.