DC Electric saves 2-3 hours per person each day using Fieldwire’s custom forms and is almost entirely paperless on the jobsite.

A family-owned and operated business, DC Electric opened its doors to the people of Idaho Falls in 1996. Running a business twenty years ago looked a little different to what it does today. Binders, notepads, and pens were office staples, and contractors relied heavily on paper plans to complete work.

It is clear that times have changed since then — so much so that DC Electric is almost entirely paperless, they no longer communicate via email onsite, and since ditching paper forms in the field they’re saving 2-3 hours per person each day.

“The ability to have custom forms built into Fieldwire has allowed us to get closer to our goal of becoming a completely paperless office.” Using Fieldwire’s custom form builder, Steven and the DC Electric team can either build digital forms from scratch or customize one of Fieldwire’s six existing forms to suit their current processes — from the same platform they’re already using to manage plans, tasks, and punch lists onsite. For example, Steven said: “Fieldwire took our project bid template and turned it into a custom form. This way, we can track all of our bids through Fieldwire, making our estimating team far more efficient.”

In addition to reducing busy work, Fieldwire’s custom forms have improved DC Electrics stakeholder relationships on various projects across the state. “With the custom forms, we are able to provide better project documentation to our customers and other contractors,” said Steven, which not only keeps them happy but eliminates a lot of unnecessary communication about project details.

"The ability to have custom forms built into Fieldwire has allowed us to get closer to our goal of becoming a completely paperless office.”

Saving 2-3 hours per person each day

Prior to using Fieldwire, DC Electric spent 25 percent of their day manually building forms and reports. “Before we could even start a project, I’d need to manually type up a project handbook; it never felt like there was enough time for that,” said Steven. “Then, during the project, the field team had to fill out daily work description sheets — or daily reports — and submit them to the office manager who then had to upload the reports onto a computer to complete the entire process. It was very time-consuming.”

Now, using the Fieldwire app, this process takes a few minutes. Contractors in the field can instantly log daily reports — site details, weather conditions, schedule delays, materials used — from any mobile device. Once the report is submitted from the field, the office manager is notified in real-time and can approve the form in the click of a button. As a result, Steven said:

“I would say we’re saving 2-3 hours per project manager per day on Fieldwire. This boosts productivity in a way that I had never imagined.”

In addition to the efficiencies gained, DC Electric has increased transparency across the entire company. According to Steven, “the office is more involved in projects now. They know what’s going on in the field without actually being there and can answer questions more quickly.” For Steven, especially, who spends most of his time in the office, the ability to collaborate on plans from anywhere, at any time, has been a huge time saver. “If I’m in the office and have a man in the field we can scale a set of drawings together despite being in different locations. This boosts productivity in a way that I had never imagined.”

Building the next generation of electricians

Fieldwire’s ability to connect dispersed construction teams enabled DC Electric to ditch emails in the field. “We no longer use email to communicate between the office and the field; that’s now done in the Fieldwire app.” While a daunting concept for some, communicating via a mobile app came easily to DC Electric’s younger workers. According to Steven, “the guys in school doing an apprenticeship program with us picked up Fieldwire so quickly. To them, it’s just like a game on their phones.”

“We no longer use email to communicate between the office and the field; that’s now done in the Fieldwire app.”

Everyone at DC Electric — from the young ones in the field to oldest guys in the office — is using Fieldwire with ease and confidence. As a result, Steven said: “I am always recommending Fieldwire to other contractors in the area. There really is no other software like it.” 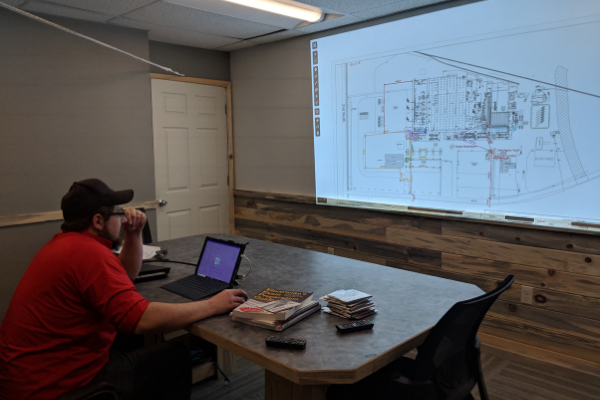