How Quickly Can We Build a Hospital? 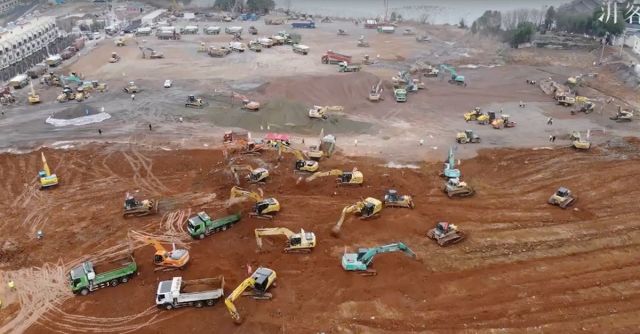 Earlier this year, the world became transfixed on a construction project: the impossibly fast erection of a hospital in China’s Wuhan district, one of two medical centers built to address the coronavirus outbreak. The 1,000-bed Huoshenshan Hospital began accepting patients February 3 — just 11 days after construction started — and is already at capacity.

So how quickly could the US build a similar hospital?

How they did it

To be sure, Huoshenshan Hospital and its sibling, the bigger Leishenshan Hospital (a 1,600-bed capacity structure built in 12 days), are more like makeshift hospitals than permanent medical centers.

“What they built in China is a temporary situation,” says John Mack, Construction Operations Manager of Connect Homes, a modular technology company specializing in prefab homes. “We all saw the pictures of the cranes on a piece of dirt. For a long-term project, there’s nothing more important than the foundation. While it’s being called a hospital, it’s really a series of modules brought in temporarily that are hooked up with HVAC and electrical. It’s a great feat, but it’s not permanent.”

Both Wuhan hospitals were built with prefab units, preconstructed rooms fitted with two beds each. Most likely, these units were previously built and then stored nearby. When it was clear there was an urgent need for more medical treatment facilities to treat virus-stricken patients, the units were shipped to the sites.

“There are two approaches to modular building,” says Grant Geiger, CEO and co-founder of EIR Healthcare, a modular medical room provider. “One approach is a blend of traditional and modular construction in which modular patient rooms are topped in or slotted into the steel core of a building. The rooms aren’t load-bearing, so they can’t be stacked.

“The other approach is to use modular rooms with steel frames that can be stacked. Imagine a patient room with a steel box around it. Everything is built offsite, from the exterior façade to the interior corridor — everything with the exception of the furniture, TV, and stuff like that. These sit on top of a podium on a traditional site and stacked one on top of another.

“What you saw in China is closer to the structural steel rooms that we build, but they’re not the fully built-out in-patient rooms that we’d see at a hospital in the US. They’re like the field offices for a construction site, they’re just a step up from trailers and are outfitted for medical use.”

As an authoritarian country, China can bulldoze through red tape and financial constraints. As many as 7,000 people — many of them migrant laborers and some bussed in from outside Wuhan — worked 12-hour shifts, sometimes longer, during the ten days of around-the-clock construction. The 11-million-person city was locked down, severely limiting the use of the roads — roads that were packed with construction vehicles.

“China must have one helluva supply chain,” says Paul Mottram, VP of Manufacturing at Connect Homes. “China also has a lot of cheap labor. One of our slow-downs in constructing houses is in finding the right people, people with construction abilities. We have a real problem hiring. There, they have cheap labor.

“What keeps the US from doing something like this are the same things that keep us all safe. We could never pull off something like this that fast even with modular capabilities because of our constraints. It would be impossible outside of wartime.”

How the US could build quickly

Given the limitations on construction in a non-authoritarian nation (labor, coordination, and regulation), how quickly could we build a hospital of similar scope?

In 2011, a 60-bed hospital was built in 88 days in Joplin, Missouri, after a tornado destroyed a medical center in that city. And modular construction has already been put to good use in at least two US hospitals, the Miami Valley Hospital Heart and Orthopedic Center’s 178-room bed tower in Dayton, Ohio, and the four-story, 188,000-square-foot Texas Health Harris Methodist Hospital in Fort Worth, Texas.

According to a recent McKinsey & Co. report, modular construction can speed up projects by as much as 50%. For healthcare projects, Geiger estimates that using modular patient rooms can reduce the construction timeframe for a hospital by 30-40%.

“Shortening the schedule for our clients comes down to two things: uncovering opportunities for modular in the design phase and parallel process — we’re building rooms while they’re pouring the foundation,” Geiger says.

In an emergency, there’s good reason to believe the US could get a hospital built in less than 90 days.

“Most governments are talking about what to do in an emergency response situation,” Geiger says. “There are likely modules for a field hospital sitting somewhere, waiting for something of this magnitude to happen. In an emergency, you’re commissioning these mothballed rooms. The time constraint is how fast you can get them from the depot to where they need to be.

“In a best-case scenario, we could build an emergency response facility in New York City in less than a few days.

“Or if a hurricane were to hit southwest Florida, there could be patient rooms stored in northern Florida or Georgia, so we could have something set up to provide medical care in southern Florida in a few days.

“It’s not something you want to talk about, but you do have to plan for when things like this happen.”