Why the Construction Industry Is Stuck in the Past

Construction is a massive industry, representing over $11 trillion worth of work worldwide every year and accounting for nearly 10% of GDP in many countries. Yet despite its large size and importance to the economy, some aspects of the construction industry seem stuck in the past, left behind by the technological revolution that has brought massive productivity gains to other areas of the economy.

According to one study by the National Institute of Standards and Technology, the construction industry wastes $15.8 billion each year because of a lack of efficient information management systems for exchanging and accessing data. McKinsey Global Institute ranks construction as the second least digitized industry in the United States, besting only Agriculture and hunting. 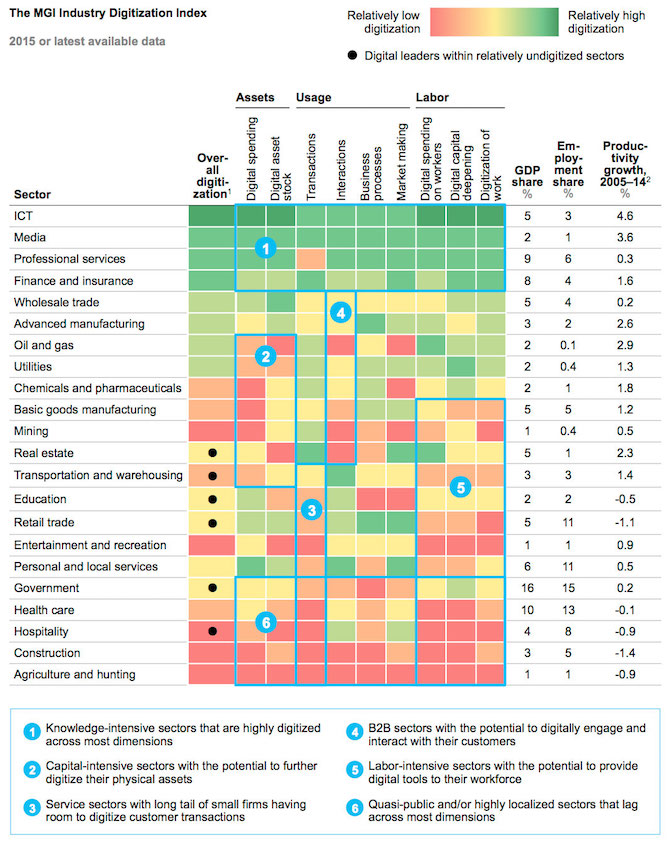 As other industries have benefited from ubiquitous computing and more powerful automation, labor productivity has taken two very different paths.

When you look at labor productivity between the 1960s and today, you can see that not much has changed in the construction industry. In the same time period, other large industries like manufacturing or professional services have undergone a major productivity revolution, increasing labor productivity three-to-fivefold. This doesn't mean that construction hasn't progressed from a technological perspective. Architects and design firms have gone completely digital in recent decades. The project manager's office now runs entirely in the cloud with a powerful suite of tailored software for bidding, planning and accounting. 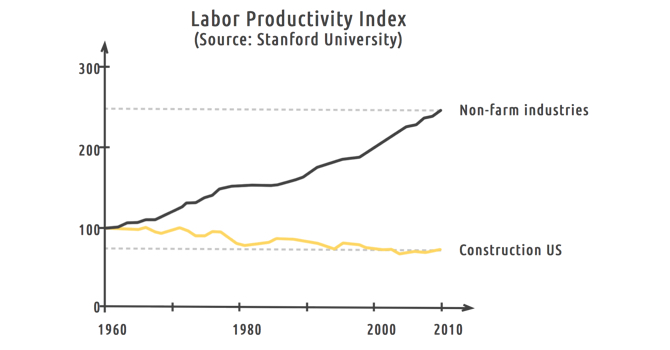 Yet we are still running the job site off of the lowest common technological denominator: paper, emails and phone calls, and that's when we're not physically tracking down someone. In short, the way we design and plan projects has gone through considerable innovation, while the way we execute those projects in the field — where 90% of the money is spent — has not, and there is a heavy price to pay for it. An analysis of more than $1 trillion worth of capital projects by McKinsey found that the largest gains in job site performance were to be found in “‘basic’ project management”. 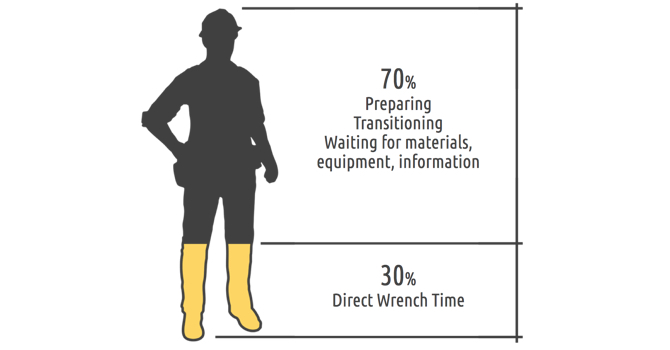 During a typical workday, a journeyman will only spend 30% of his/her time actually building — also called "direct wrench time". Another 40% of that day is spent preparing for tasks, gathering equipment and materials, and transitioning from one area to the next. The last 30% is often spent idling. Idling is what happens when we fail to answer this question: How do we get the right people, with the right information, materials and equipment in the right spot at the right time? 30% of a journeyman's day is the price we pay for using outdated management processes in the field. So the question then becomes: Is this an acceptable cost?

In most modern countries, the answer is understandably no. When faced with a problem like this, you often have two choices: Solve the problem with labor or technology. Since the 1960s, the cost of labor has risen significantly while the cost of technology has continued to drop. It used to be cost-effective to throw a lot of manpower at your problems — and it still is in many parts of the world — but that's no longer the case in the U.S. or Europe.

The winning strategy then becomes quite obvious: Companies should hire the most capable craftsmen they can find and provide them with the technological leverage they need on site to get the job done better. Then, and only then, will your field operations leap ahead of the 1960s.

More on the benefits of using Fieldwire here.