Blue Mountain Electric managed and sorted 1,000 plans on Fieldwire and tracked all upcoming electrical tasks on the $50m hanger retrofit.

When we think of airplanes, our first image is usually of an open sky with the miniature silhouette of a jet high above us. What we might not picture, and what requires a lot of attention, is the facility that houses these great metal birds when they’re not gliding through the clouds. One such base, the U.S. Naval Air Station on Whidbey Island in Puget Sound, recently needed two of its hangar bays to be retrofitted. As one of the designated mega-projects in development by the Department of Labor, some sturdy shoulders were needed to bear the weight of this challenge.

Enter Blue Mountain Electric, a Washington-based, veteran-owned industrial and commercial electric company. With years of experience working on Navy installations and design-build projects, there was no business better suited to shepherd the electrical aspect of the almost $50 million Hangar 6 expansion project on NAS Whidbey Island. While other contractors are handling the general construction, the new aircraft hangar for this naval base cannot reach full functionality without Blue Mountain to give it a pulse.

“I can maintain a conformed set of drawings very easily in Fieldwire. As far as I’m concerned, your iPad app is second to none. I’ve never seen any other product come close to how powerful it is.”

After construction on the hangar began, Nathan Howat, the Vice President of Blue Mountain Electric, sought a solution that would keep up-to-date drawings in his crew’s hands. Previous tools that Howat had tested to resolve this issue did not adequately suit Blue Mountain’s needs and fueled his search for a better alternative. That search ended when he discovered Fieldwire, a construction management app that allowed the Blue Mountain team to retain all of their detailed on-site markups even after updating the sheet versions. The ability to deliver current drawings to his employees without losing valuable data certainly struck a chord with Howat.

“I was looking for a way to get a conformed set of drawings out to my crew quickly,” says Howat. “What I like about Fieldwire is that I can maintain a conformed set of drawings for the entire project, marking them up in the field as electronic as-builts, and then when the drawings change, I can upload new drawings and the markups carry over. I don’t have to worry about redoing all of those markups. So that’s the main thing that caught my eye.”

The next hurdle that Howat’s team encountered on the Whidbey Island project was speed, specifically the increasing amount of sheet changes. In the past, the project had been peppered with printed drawings that needed to be replaced at a near-impossible rate. As a result, the prospect of a modern method for plan versioning that could match the quickening pace of design updates without sacrificing information helped Fieldwire stand out to Howat. His team now had the tool they needed to address new additions to the naval base hangars at the speed they came in, and receiving current drawing information helped substantially reduce rework and accidental efforts.

“We are using Fieldwire for a lot of drawing management,” says Howat. “When we first received the original set of drawings, within 2 months they sent out a clarification that changed about 150 electrical drawings. So as soon as we received those, all of the drawings I had previously printed were no longer valid. I had to then reprint them and get them out to my crew.

“Since that time, I’ve had 30 different design changes that range from a couple to 50 altered drawings, so there’s been some serious problems with tracking conformed drawings since the beginning of the job. It was so bad at one point that an elevator shaft was drilled in the wrong place. There were trenches dug in the wrong areas, doors cut where they weren’t supposed to be. There was so much changing so fast that many of the contractors could not keep track of the most recent drawings. That all changed once we began to use Fieldwire.” 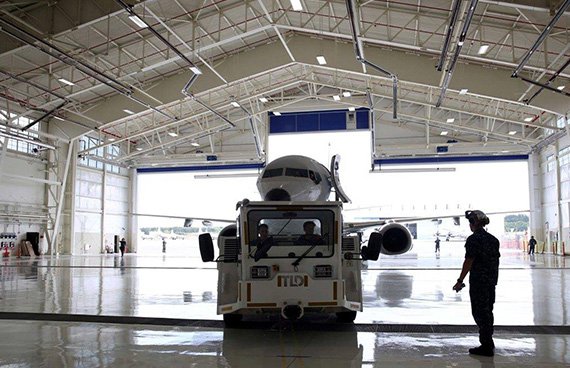 The expansion of Hangar 6 involves more than a few basic additions and maintenance. Given the nature of the facility as a naval air base, the daily activity of its occupants cannot simply cease while construction is underway. This presents a unique set of challenges for Blue Mountain Electric, as do the complex structural obligations that the hangar bay must meet in order to be up to code. But thanks to the intuitive management features available in Fieldwire, these day-to-day obstacles are greatly diminished.

“This is a very large project with six different phases,” says Howat. “We have to maintain services so that the facility can be occupied by two squadrons while we renovate the other parts of the building. It’s a very intricate process keeping their electrical and mechanical systems up and running while we basically do a complete gut of all the other spaces, as well as a complete seismic retrofit for the entire building. There’s actually five different sections of the building that have to be seismically separated from each other so they can all vibrate independently from the rest in the event of an earthquake. Being able to manage all of that in Fieldwire is a tremendous help.”

Once their worries about drawing control had been alleviated, Howat and his team still needed a simple way of locating their plans in the app without any fuss. Luckily, the plan tagging system in Fieldwire provides an easy solution for grouping and filtering all project plans on the fly. With so many drawings to sift through, using plan tags dramatically simplifies the whole procedure.

“By the time I uploaded all of our drawing sets, I had close to a thousand sheets. I began to wonder, ‘How do I organize all of these drawings?’ because there were just too many of them,” says Howat. “Then I started looking into Fieldwire’s tagging system, which just blew my mind. I can tag drawings with any label, such as “first floor,” or “area D,” and now anytime my guys are in the field with an iPad and want to view those specific drawings, they can just search for that tag and immediately pull them all up. It goes from 980 sheets to 3 in seconds. That’s some serious power being able to zero in on the drawings I want instantly because of those tags. It’s the most incredible thing ever.”

Another built-in resource that Howat makes use of is the “@” sign feature, a savvy shortcut to quickly assign attributes and ownership to tasks. By leaving a comment using the “@” sign method, he can assign a task to one of his employees then and there, and the real-time notifications generated by Fieldwire’s task management system alert him whenever that task is then updated by the owner. This makes tracking his team’s progress and staying on top of important deadlines a lot smoother. The same is true for the project’s general contractor, who started using Fieldwire after an introduction from Howat. The app allows them to successfully coordinate their efforts and strengthen communication between multiple trades.

“We have to turn in utility outages 21 days in advance,” says Howat. “What I do is create an electrical outage request, then I create a task in Fieldwire and place it on the drawing in the exact location where it will take place. Then I attach the outage PDF to the task, give the task a due date, and assign it to my lead electrician. So each day from then on they get an email first thing in the morning reminding them of that outage until it gets taken care of. I can also use the ‘@’ symbol feature to tie in other people to the task as well. Once the outage is completed, I can verify the task. It all just makes tracking outages so much easier. It’s a huge advantage for taking care of every task.” 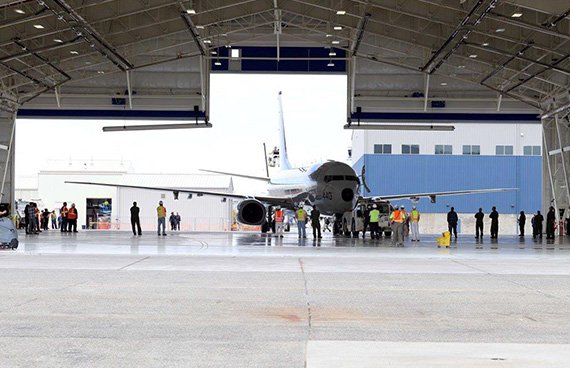 The capabilities of Fieldwire are not the only aspects of the app keeping Howat on board. The ease of use and the ability to pick up your mobile device and access all project data while on the job site have also made a huge impact. It took no time at all for the Blue Mountain team to learn the ropes and incorporate Fieldwire into everyday activities, and through continued use, their on-site efficiency began to grow considerably.

“I set up Fieldwire and did some initial testing, which only took about a week before I was fully sold on it,” says Howat. “Then I showed it to my field crew. They were sold on it immediately. They got used to using the app on their iPhones and iPads within a couple of days and were just loving it.”

Despite a rocky start, the hangar expansion project began to turn around. Since utilizing Fieldwire to handle drawing management and task tracking, there is now less confusion among the on-site crews and accidental construction based on outdated plans has also disappeared. By rallying behind this new approach to organizing their project, Howat’s team is saving more time and reducing the unnecessary ins-and-outs of conveying daily updates to each other. There are also notable monetary savings to be seen as well.

“I would definitely say Fieldwire is saving us time and money,” says Howat. “Just the fact that I’m not printing out every drawing or everyone’s schedule is a big help. We’re saving a lot of money on printing because I don’t need to print out each trade’s set of drawings anymore. We still print a handful of drawings, but all the rest we just reference and mark up from within the app. There’s a lot of value to that level of convenience in the field.” 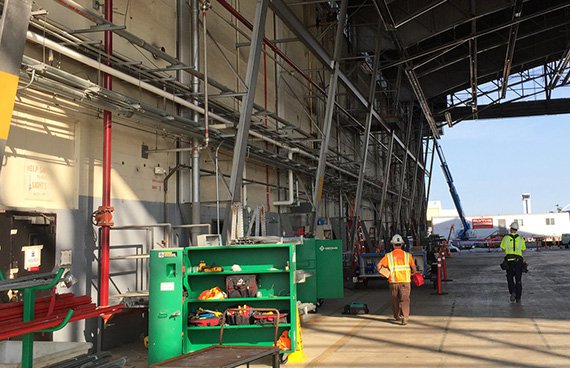 Despite significant challenges inherent in design-build remodel projects, the modifications to Hangar 6 on NAS Whidbey Island have continued without a hitch thanks to the dedication of Nathan Howat and the Blue Mountain Electric team. Through their collective skill and the practical magic of Fieldwire, they have continued to march forward and improve the naval air station with top-of-the-line work. Accurate drawing control, lightning-fast access, and innate usability helped ignite what, up until then, the project had been missing. The success derived from adopting Fieldwire will surely carry over into future projects for Blue Mountain, as well as anyone wise enough to lend Howat an ear.

“I have already recommended Fieldwire to other companies, and I’m getting good feedback from them. They like it as much as I do,” says Howat.