Encompass AV used Fieldwire's mobile app to view and update plans when installing audio visual equipment across the U.S. As a result, they no longer take physical drawings onsite.

There is no shortage of demand for reliable network services and entertainment solutions, so it’s no surprise that Encompass AV has become one of the most trusted audio/visual and acoustical design firms in the Chicago area. Founded in 1999, Encompass AV has spent nearly two decades providing quality audio/visual installations in key areas of the third largest city in America. After becoming well known in Chicago, they’ve branched out into the greater continental U.S. as well and are increasingly recognized as leaders in their field with each passing project. It’s a reputation that certainly turns heads.

“It would probably be impossible to get through our projects without Fieldwire. I really can’t imagine our workday without it at this point. We never could have scaled up our business like we have without the assistance that Fieldwire provides us.”

As experts in commercial and communal audio/visual services, Encompass AV is often managing many different projects all at once. They keep themselves busy installing entertainment displays, network cables, digital advertising, surveillance, and audio systems in a wide variety of public spaces. Their clients include hotels, high-end restaurants, night clubs, office buildings, data centers, and even churches. Encompass AV is a major presence around Chicago’s Wrigley Field as well, handling audio/visual work in just about every bar and eatery surrounding the stadium, even the rooftop access on buildings with views of each baseball game.

Mark Higgason, Vice President of Operations at Encompass AV, joined the team back during their founding year. His first job was the company’s second ever, and in recent years he’s helped expand their reach by incorporating Fieldwire into their routine.

“I’m starting my 75th Fieldwire project right now,” says Higgason. “We’ve used the app on quite a number of projects for almost 3 years now. Originally, it was just used by our field crews to keep track of where things were and notify team members of changes, but the way that we use Fieldwire has evolved quite a bit over all that time. It’s incredible.” 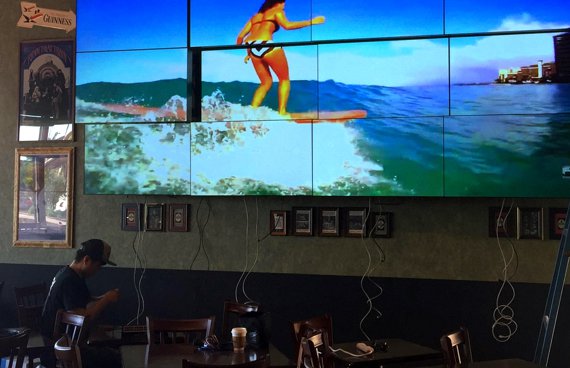 Such a lengthy track record with Fieldwire has bred a lot of success for Higgason’s firm, boosting their potential project output while inefficiencies continue to plummet. The construction app has enabled Encompass AV to simultaneously broaden their services to more clients and eliminate clunky methodology from the past. Fieldwire’s solid task management system plays a large role in this, allowing the crew to record all updates and progress directly in the app and then send out that data to others in a sleek PDF or spreadsheet report for easy viewing.

“The detail that I can add in a task and then send out in a report directly to a customer, a technician, or a GC has been pretty awesome.”

“There are workarounds for any process with other document-sharing programs, like Google Docs or just Dropbox, but they wouldn’t be as swift or useable to us in the way that Fieldwire is. We’re never frustrated or slowed down with Fieldwire, it just makes everything seamless.”

Task data is sacred in Fieldwire, with timestamps, real-time notifications, and accountability for all newly-added content being the highest priority. It certainly helps Mark Higgason’s team track their own work marvellously. With every completed installation, Encompass AV’s star continues to rise without being hamstrung by a complicated or overwhelming support system. Unlike other mobile construction management solutions that have rigid flows, Fieldwire remains flexible by letting you decide which of its many features you wish to use. This made adoption of the app very easy for Higgason’s team, and the results they’ve created with the help of Fieldwire continue to impress.

“One thing I really like about Fieldwire is that it’s so open. You can use all of the features it offers, or you can use 10% of it,” says Higgason. “I’m not required to use the whole system to address my needs. There are some features I lean heavily on, and there are some that even I haven’t touched yet. So it’s nice to be able to choose to use just what I need, and it’s also nice to know that when I am ready to try out those extra features, they’re there waiting for me. The constant app updates and new features have been great too.” 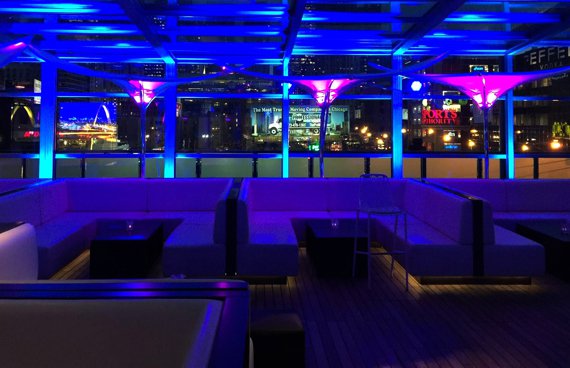 Another primary use for Fieldwire is drawing management, with an emphasis on viewing sheets on the go and being able to version and mark them up as needed. This ensures that everyone is always working off of the latest sheets, reducing rework and confusion across the entire project. It also helps alleviate the pain of having to cart around physical drawings on-site, as well has having to remember site changes or hear them secondhand before having a chance to mark them down for everyone else. This is a benefit that Higgason has definitely taken advantage of.

"I tried every type of punch list and project organizing tool I could find out there, but we stuck with Fieldwire because it really helped improve workforce efficiency."

“Before Fieldwire, we probably just used paper,” jokes Higgason. “But honestly, we just used a mismatched collection of plans and memory. I would store a lot of documents in various cloud services, and I tried every type of punch list and project organizing tool I could find out there, but we stuck with Fieldwire because it really helped improve workforce efficiency. I put together a presentation for my company, bought a bunch of iPads, and we’ve been using it ever since. All of the markup and scaling tools that the app offers really come in handy.”

Higgason’s crew puts these plan management tools to good use on a daily basis, and these robust features, combined with some creative thinking on their part, help them quickly get the ball rolling on new projects right from the initial inspection.

“Recently we’ve put Fieldwire in the hands of our Sales staff for doing preliminary site surveys. That’s actually really helped out a lot,” says Higgason. “Since our original contact with clients is through Sales, they can actually draw up a quick map with a vector program they have on their iPad and then upload it into Fieldwire. We can then start marking out locations before we even begin the core process. It’s been invaluable to have the Sales guys come out and speak to the customers about specific details, include all of those details in Fieldwire, and then have our crew come through at a later date with all of these personal notes available to them. I never really envisioned it in the hands of our Sales staff before, but there it is. It’s an unusual approach, but it’s been working great for us.” 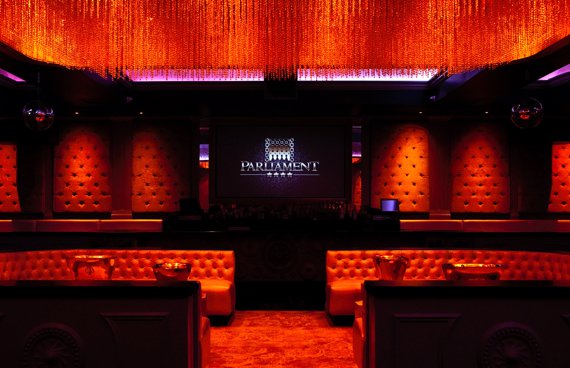 A wealth of versatile app features is its own reward, but their value is truly illustrated when you look at all of the savings they trigger down the line. Mark Higgason has certainly noticed the dramatic amount of man-hours his team has saved through years of using Fieldwire, which have also translated into significant financial savings. His firm is now always prepared to tackle their work, even if it’s much later in their schedule, because they know they can rely on the app to keep them efficient.

"If you need a way to communicate with your team and be effective, Fieldwire is the way to do it, hands down. It would be impossible to operate day-to-day without Fieldwire. It literally does half of the work for me.” --

“Fieldwire absolutely saves us time. It saves us countless man-hours and prevents tons of mistakes,” says Higgason. “I do a lot of remote work out-of-state, probably about 30%, so sometimes I’ll set up a project in Fieldwire and won’t be there on-site for several months afterward. I’ll have detailed photos and measurements of everything stored in Fieldwire before the walls even go up, so I can always go back and reference them. I don’t know any other way to possibly do that. So the man-hours that we’ve saved translates into thousands, maybe even hundreds of thousands of dollars over the years.”

Encompass AV has developed a very streamlined approach to managing each job, boosting their performance considerably. And the clear correlation between saved time and better results is made possible through the app’s ease of use. Fieldwire requires no special training to become an expert, and as Higgason and his crew discovered, easy onboarding led to rapid improvements.

“The learning curve was pretty small,” says Higgason. “Most of the programs that we sometimes use can be a lot harder to get the hang of, but Fieldwire is pretty intuitive. It didn’t take long to teach my people, and the age range of those working with us is pretty varied, so the fact that everyone could get used to it quickly with a little bit of instruction was great. They use it confidently while they’re out there working.” 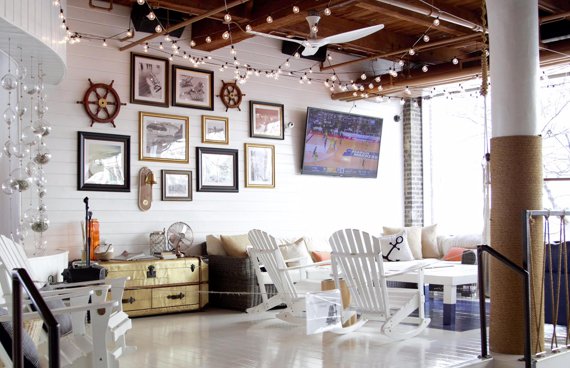 With the constant demand for audio/visual services in the many food, business, and entertainment industries, it helps to have the right tool at your side when clients come calling. Fieldwire amplifies the considerable skill possessed by Mark Higgason and the Encompass AV team, aiding their communication and sharing of project data while also shaving off wasted time and effort so that they can concentrate on their craft. What started as a leap of faith years ago has become a lasting partnership, one that both parties will continue to nurture as the work keeps rolling in.

“We thought Fieldwire would be a novelty back when we first tried it out, but it’s proven to be such a major asset. I preach its word to every contractor I meet, and at this point, I can’t imagine working without it.”