Time can shape a building just as it can a person. Despite its strength, a historic building is just as susceptible to the passage of time as our own elderly, and requires the same amount of care. This is certainly true of the Fifth Avenue Presbyterian Church in New York City, which has stood as a testament to craftsmanship and resilience since 1875. Over 140 years of harsh winters and general wear-and-tear had begun to loom large on the old church spires. To save them from the grip of time, time-tested skill was required.

That tremendous skill would be provided by a pair of talented construction teams: Ford 3 Architects and Deerpath Construction Corporation. Based out of New Jersey, the architects at Ford 3 have a knack for finding the balance between historic and contemporary influences, which made them ideal for the FAPC project. Similarly, with over 40 years of masonry experience under their belt, Deerpath Construction has delivered high-quality work on landmarks across New York City. Together, their hands were the perfect fit for restoring the old stones at Fifth Avenue.

“From a project management standpoint, it’s essential. A program like Fieldwire really makes things a lot easier and a lot more efficient. I absolutely recommend it.”

As you might expect, a church so deeply rooted in the past had the evidence of those years reflected on its exterior walls. When Katherine Frey, Preservation Architect at Ford 3, first set eyes on the building it was clear there was much work to be done. The FAPC project primarily involves brownstone restoration along with exterior window replacement for both of the main structures on the property, as well as the parish house attached to the back of the sanctuary. With so many nooks and clefts to assess, Frey sought a tool to help make her inspections less burdensome.

“We had a team survey the building about 4 years ago to document the conditions, so we’ve been preparing for the restoration ever since then,” says Frey. “When we first started construction, I was taking photographs with my camera and coming back into the office to download them. We soon found Fieldwire while searching online, and when I started using it, I was really impressed by how user-friendly it was from the very beginning. I started using the phone app to snap photographs and everything became faster and more simple to manage.” 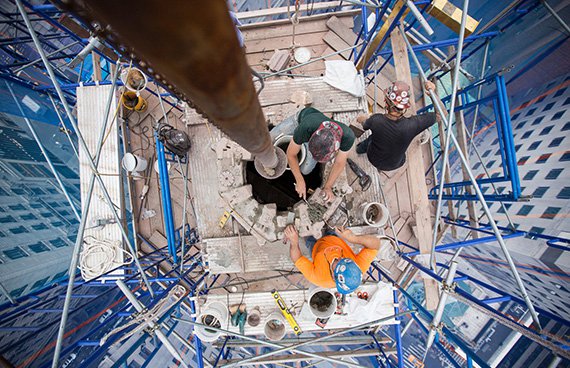 Frey could now survey the outer walls and instantly upload her photos of the damages. That was a big help to her colleagues at Deerpath Construction, who could then track each item with newfound clarity. Matt McGarry, the Project Manager at Deerpath, found Fieldwire remarkably helpful for documenting and delegating the structural repairs to his team. All of the damaged patches of stonework would be marked out in advance and synced to his crew’s mobile devices, which was especially handy after time additional surveys yieled a need for additional repairs.

“The initial survey for this restoration project was done years ago, and since then, time and New York City weather had caused a lot more deterioration, so a lot more repairs were added,” says McGarry. “This caused the money to change, and in order to track all of the new repairs properly, Fieldwire was the best resource to provide Katherine and myself with the most accurate information.”

With a growing list of repairs from base to pinnacle, the FAPC teams found the simplified coordination offered by Fieldwire quite beneficial. Frey would perform her survey each week as new scaffolding was erected, share it with Deerpath via Fieldwire, and the contractor would take it from there. All of her notes and photos would be included in the tasks she created on the church drawings in-app. The contractor could add new notes and photos as each repair was completed. Having a comprehensive record of all the repair progress made signing off on each completed task easier than ever, as was managing all of the additional costs from the unexpected items.

“I pretty much use Fieldwire all day, every day. It’s been great because we had at least a couple hundred extra repairs that we had to take care of, and without Fieldwire it would have been a lot less efficient trying to stay on top of them all,” says McGarry. “In the past, we would have to mark up the as-builts and say, ‘Okay, we did this, we did that, etc.’ In Fieldwire you can see the initial repair location that Katherine points out, then we can add our notes and in-progress photos to the tasks, and then share a finalized photo and date. Later on she can verify that the repair has been finished. It all really makes the closeout process less overwhelming. Everything needed for the final survey is already there in the app.” 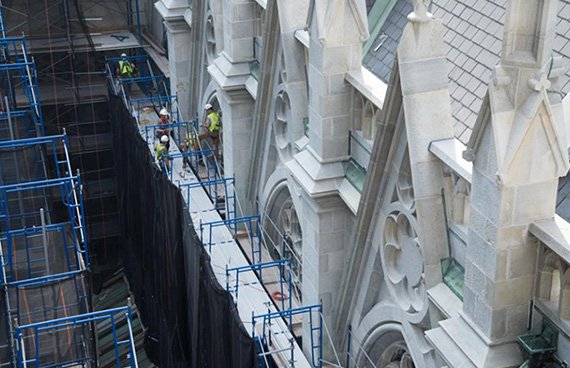 A Solid Foundation for Communication

The Ford 3 and Deerpath crews faced many hurdles atop the aged church, but communication was never a concern. Their correspondence was both tracked and improved thanks to Fieldwire’s real-time notification system, which let Frey and McGarry know when a task had been updated with new content. This saved them the trouble of checking back in with those assigned to specific repairs. The software keeps a living transcript of comments, photos, and any information included within tasks, housing everything in one convenient place.

“Fieldwire greatly assisted with communication between myself and the contractor,” says Frey. “The app hasn’t been bogged down at all. Photos get sent right to them, and I am notified whenever they finish the repairs. When I’m ready to prepare a complete record of the project, I’ll be interested in checking out the reporting feature Fieldwire offers. I believe it will be a good way of documenting the project.”

The real-time notifications helped streamline McGarry’s workday by allowing him to easily monitor everyone else’s labor. Every new entry left by his team in the task content would include a date stamp and the name of the person who made it, so accountability was never an issue. It also allowed him to communicate on the fly with anyone across the job site.

“I think Fieldwire speaks for itself,” says McGarry. “Going back and forth with Katherine would have been a lot more difficult, trying to quantify and locate all the repairs. Fieldwire really made everything a lot easier and helped us be very precise.

"Instead of having to go up hundreds of feet on scaffolds each day to track repairs, I could have one of our guys already up there use an iPad to input their progress in real-time, which is awesome. I’d know right away when something was finished."

“I could then pull up each repair myself and organize all the items in spreadsheets based off of the Fieldwire data. And initially, Katherine would include all of the photos and locations of each repair, so not only would Fieldwire give you the location on the drawing to find each item, but it also gave you the photos so you could really hone in on the exact spot of the building where the repair needed to be done. It left no room for error.” 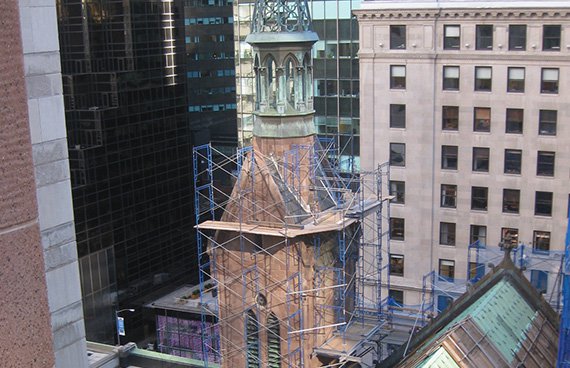 While it was the efficient functionality of Fieldwire that first attracted Frey and McGarry, it was the ease-of-use that led to their full adoption of the construction app. Project management techniques in this industry can often be as old as the FAPC itself. When a practical, modern solution appeared that could replace those dated methods with a simplified process, converting to the new option was an easy decision.

“Fieldwire is very intuitive,” says Frey. “It’s always been pretty easy to figure out how to use it, so it didn’t take long to get familiar. I’ve just found it very easy to work with and suitable for what we’re looking for. I had never used an app like this before, and now I use it pretty much on a daily basis.”

The ability to learn the core features of the app without detailed instruction prevented any confusion or loss of time when first laying hands on Fieldwire. For McGarry in particular, all it took was some prodding to learn the ropes and quickly become savvy not long after.

“I just kind of played around with the app to learn how it worked,” says McGarry. “I got the hang of it pretty quickly, and looking back, I’ve used Fieldwire every day for the last 2 years. It’s saved a lot of time by organizing all of the information for us.”

The minor effort required to successfully implement Fieldwire paid off big, saving untold amounts of time for Ford 3 and Deerpath. No more compiling data from multiple sources, no more relaying information verbally, and no more distributing it to others manually. All they had to do was draw from the wealth of data they had already entered into Fieldwire. Having one intuitive tool to house everything related to the project proved to be a winning strategy.

“If I didn’t have this app, I’d be creating a new report every day about each thing and trying to get that information to them in an understandable way. It really simplified that process between us, so in that regard, it absolutely saved me time.”

“It’s absolutely saved us money, too,” says McGarry. “All documentation and verification can take place within the app and happen more immediately. I’ll be at my desk and getting updates from my crew showing the repairs being done then and there, so I think it makes everything more seamless. While I’m working on something else, the stuff that I’d previously have to be out there documenting is already being documented by the guys up there. Fieldwire definitely saves time, and time is money, so everything benefits.” 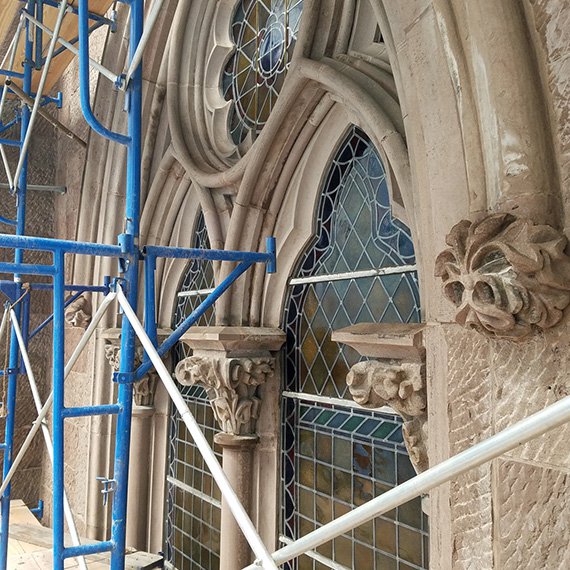 The restoration of the Fifth Avenue Presbyterian Church is now complete, with all of the exterior scaffolding taken down at Thanksgiving. Thanks to Matt McGarry and Katherine Frey, and the expertise of their colleagues, the wounds left by time on this historic church are healed. Their industry know-how, along with some help from Fieldwire, ensures that the FAPC will be preserved for another century, if not longer.

“I would recommend Fieldwire to other architectural firms,” says Frey. “It’s a good app for improving time spent in the field.”

“From a project management standpoint, it’s essential,” says McGarry. “A program like Fieldwire really makes things a lot easier and a lot more efficient. I absolutely recommend it.”