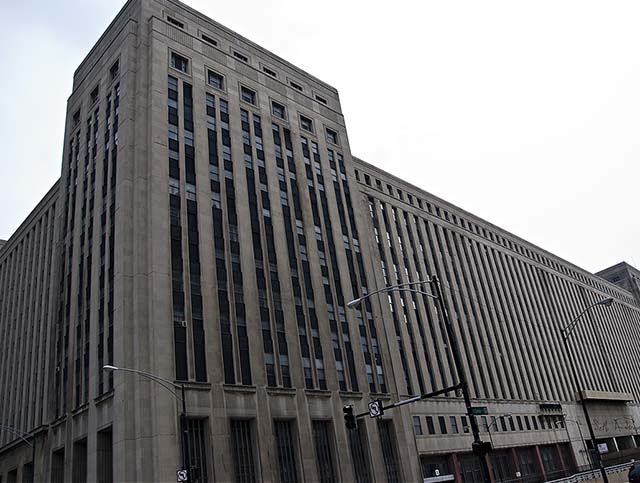 What: The US’s largest historic redevelopment project, the renovation of a 100-year-old, nine-story-tall structure spanning two downtown city blocks and an interstate highway

Rebuilding an expansive, 100-year-old structure in one of the world’s busiest cities is one thing. Doing it with a mandate to keep and restore historical details is another. Add a public spotlight and expectations that the project resurrect an entire neighborhood and you’ll get an idea of the pressure facing BEAR Construction with its renovation of Chicago’s Old Post Office. It’s the first phase in a massive effort that will include a 3.5-acre rooftop park, an expansion of the city’s riverfront plaza, and a public food court area.

As the largest historic redevelopment in the US, the renovation of the Old Post Office in Chicago’s southwest loop is a critical part of the rebirth of Chicago’s South Loop, connecting the already booming West Loop with a long-forgotten corner of the city. Several other massive residential and retail projects are going on nearby. Across Canal Street, ground has already broken on a 60-story office tower, and an even taller building is conceptually approved next door. The redevelopment of the Old Post Office was the key to all of it. 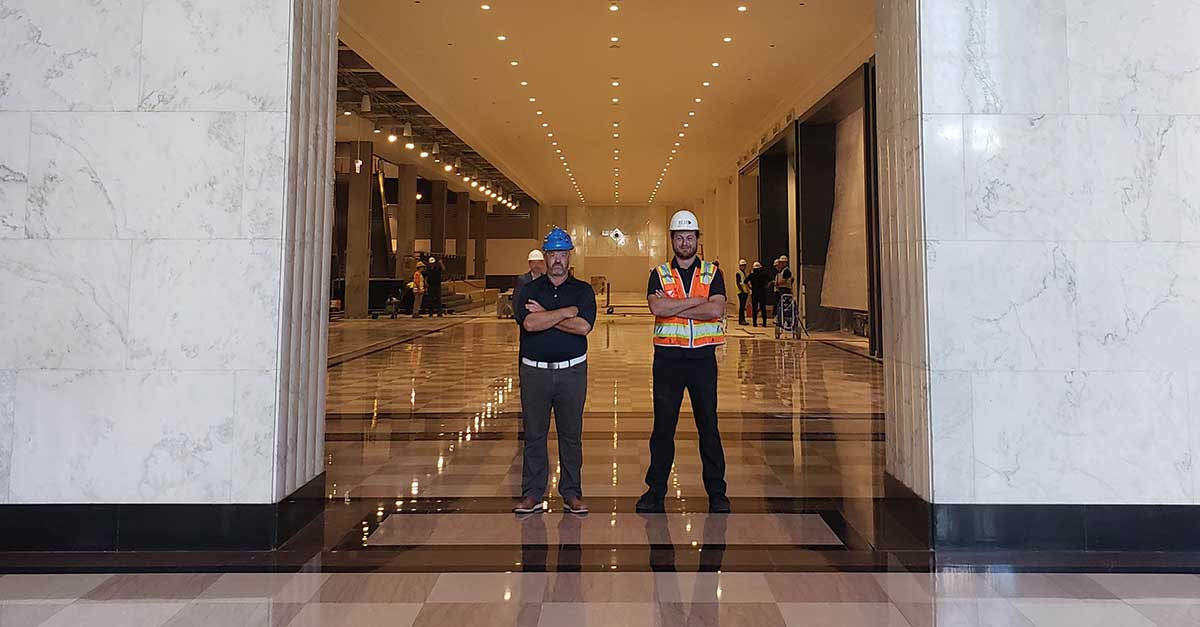 Originally completed in 1921, the original Main Post Office was expanded in 1932 to make room for the bustling mail-order businesses of Montgomery Ward and Sears Roebuck — an expansion that included developing over the railway beneath and leaving a bridged structure through the building for a future highway underpass extension.

But by 1997, the postal service relocated to a modern new facility across the street and the once-bustling post office closed. Building maintenance halted and the building started falling into a state of disrepair.

A British real estate developer bought the property in 2009. Several grand plans came and went without any success while the building continued to deteriorate. By late 2015 the City of Chicago took action, citing public safety in demand for over $100 million in needed repairs, mostly to the failing façade, roof, and an exhaust system that is critical to Amtrak and Metra stations below the building. In early 2016, New York-based 601W Companies purchased the property and agreed to the city’s demands, and proposed an ambitious renovation of the entire property.

BEAR Construction was involved from day one, assisting with the purchase process and early budgets. A field office was set up within the decaying building and work began almost immediately to stabilize the structure and make needed repairs to make the property safe enough for workers. That office served as the nerve center for over three years while BEAR finished the massive project.

“We set up a 4K 55-inch touchscreen with Fieldwire as the main page,” BEAR Construction Assistant Project Manager Nick Wienold says. “Our project team used Fieldwire from bid to bulletin reviews and OAC meetings, so a large, interactive screen for everyone to review the project was essential when working in groups up to 20 people.”

For the project, Wienold and the rest of the BEAR Construction project management team of over 20 field staff uploaded and utilized more than 10,000 plan sheets to Fieldwire.

“So much was changing so rapidly, and we need to be quick,” Wienold says. “We’d have about 80 bulletins, or updates, for one package. It would’ve taken us 20 minutes to go from the office to where the work was, so we needed Fieldwire for document control as well as plan management.” 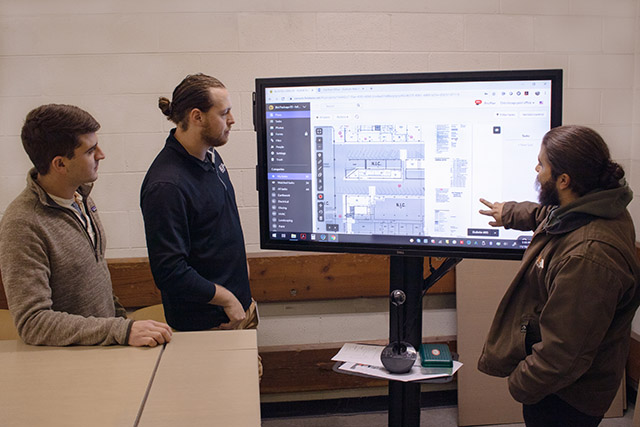 Challenges of a historical renovation

“A renovation is very different from a new build,” Wienold says. “With a new build, once the scheduling and initial due diligence and planning are complete, the project comes down to production. As you work up through the building, it’s mostly a rinse and repeat process with few surprises. Most of the design conflicts and constructability concerns are identified and worked out in the early phases.”

“But on a renovation, there are so many unforeseen conditions, so many twists and turns,” Wienold says. “Our team would average four-to-five RFI’s a day with multiple bulletins being issued by the design team each month. We might demo an existing wall and then find it was embedded into the floor, resulting in a change to repair and infill the floor. It was like putting puzzle pieces together, but the puzzle was a moving target. Every change would cause a ripple effect.

“We set up a 4K 55-inch touchscreen with Fieldwire as the main page. Our project team used Fieldwire from bid to bulletin reviews and OAC meetings, so a large, interactive screen for everyone to review the project was essential.”

“The building had many unique original features, from postal inspection “spy tunnels,” 12-foot diameter mail chutes, bronze handrails, and numerous vaults,” Wienold says. “We had to keep many of these and restore the portions that were falling apart. It’s not like anyone keeps mail chute parts in stock anymore.”

Case in point: 100-year-old one-by-one-inch ceramic tiles. “We needed to restore large portions of floor or infill missing tiles for parts of the entrances to satisfy historical requirements,” Trevor Murphy, BEAR Senior Project Manager, says. “We had to source them from a family-owned tilemaker (American Restoration Tile) based in Alabama. The two sisters had to fly up to take measurements, then went back to set up the kilns and even switch to different soil to replicate the process that was used in the 1920s to make them.”

“A lot of times, we were frustrated by how intense some of the historical details were,” Wienold says. “But as much as getting them right was a huge challenge, it’s something we can all look back on and think how astonishing it is that we were able to help restore these back to their original glory. There was a lot more to it than just opening up a catalog and ordering some tile.” 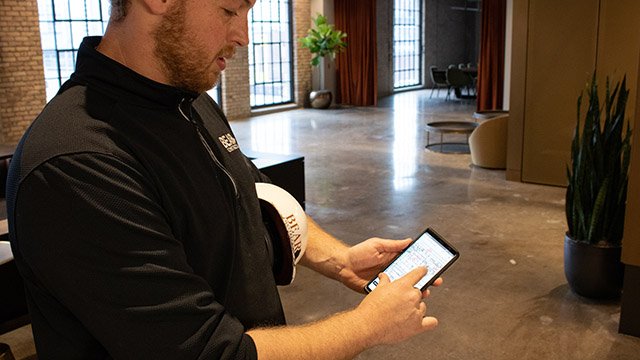 Ferrara Candy, the first of the Old Post Office’s new tenants, moved in earlier this month, and it’s only going to get busier. Walgreens, Uber, and many more are all signed on for office space. Total capacity is 14,000 employees; nearly 1.4 million square-feet of the space is expected to be occupied by June 2020.

Even as tenants move in, Bear continues its work. “Now we’re doing a lot of tenant turnover floor build-outs, a massive public food court, and working a massive roof renovation to create recreation area we’re calling the ‘Prairie,’” Wienold says. “A basketball court, running track, and an outdoor bar, and private tenant patios with unique views in all four directions of the city are all programmed.”

“There is a level of excitement for everyone to be on a project of this magnitude and in the spotlight,” Tony Gloria, BEAR’s Field Technology Manager says. “It’s always great to build something, to see your work and know you were a part of it. But this is a staple of historical Chicago. When you drive into the city, it’s the first thing you see as you literally drive through the building.”

“This is in the epicenter of Chicago construction right now,” Wienold says. “It was an eyesore, but now it’s revitalizing the entire area.” 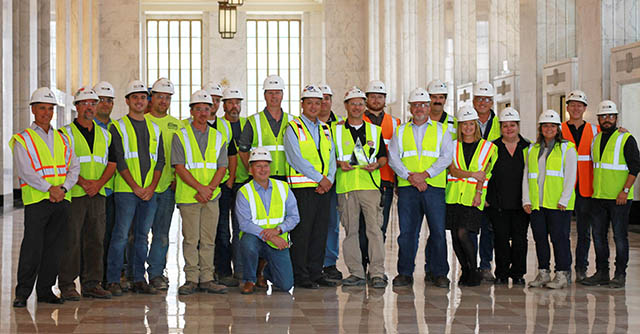 Learn how Fieldwire can improve productivity on your projects. Schedule a demo today!