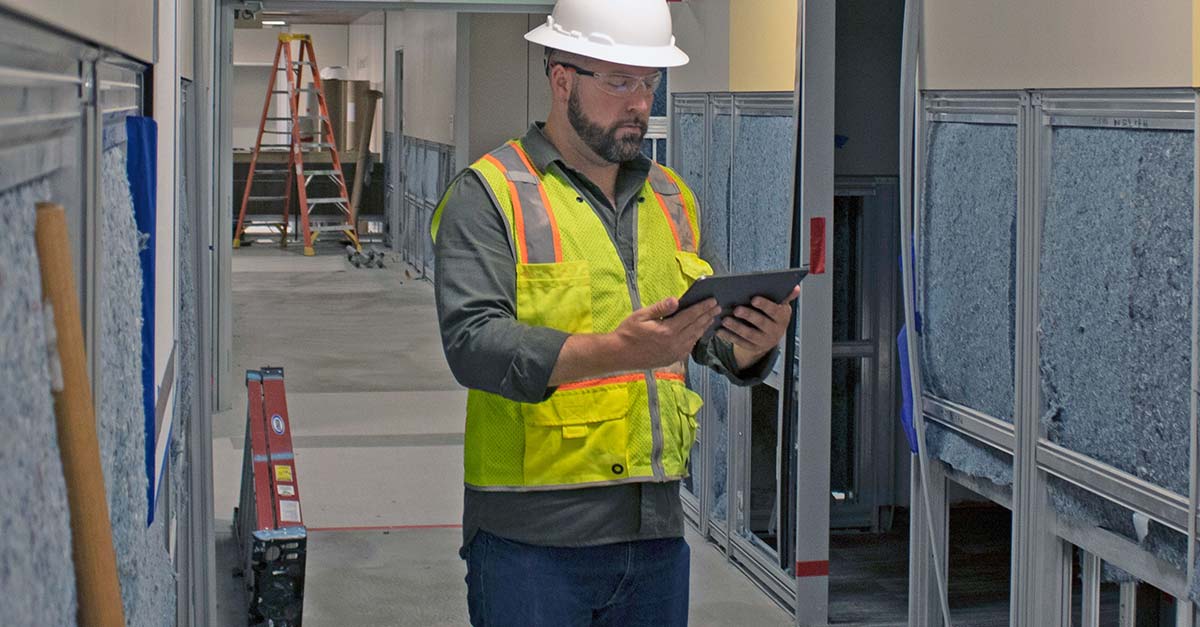 What is a punch list? A punch list (also called a snag list, deficiency list, or punch out list), according to the online Business Dictionary, is “a document listing work that does not conform to contract specifications, usually attached to a certificate of substantial completion.” Put simply, it is a list of to-do’s that need to be completed before a project can be considered finished.

Now that we’ve covered the punch list definition, it’s perhaps more important to understand how they’re used. Punch lists are commonly tackled towards the end of a project when deadlines and tight and workers are exhausted. Which, in turn, increases error and prolongs project turnover. Answering the question, “what is a punch list?” isn’t quite so simple, as there are multiple types of punch lists, and debate over which is the most effective. One punch list best practice is the ‘rolling punch list;’ a real-time log of punch list items that develops as deficiencies arise. According to Michael Clippinger, the National Director of Quality at JE Dunn, an ENR Contractor of the Year, “a rolling punch list is the most common approach toward achieving the ultimate zero-punch list goal.” A zero punch list indicates that there is no outstanding punch list work at the time of project completion. For this to occur, effective planning, project management, and transparent communication is required. 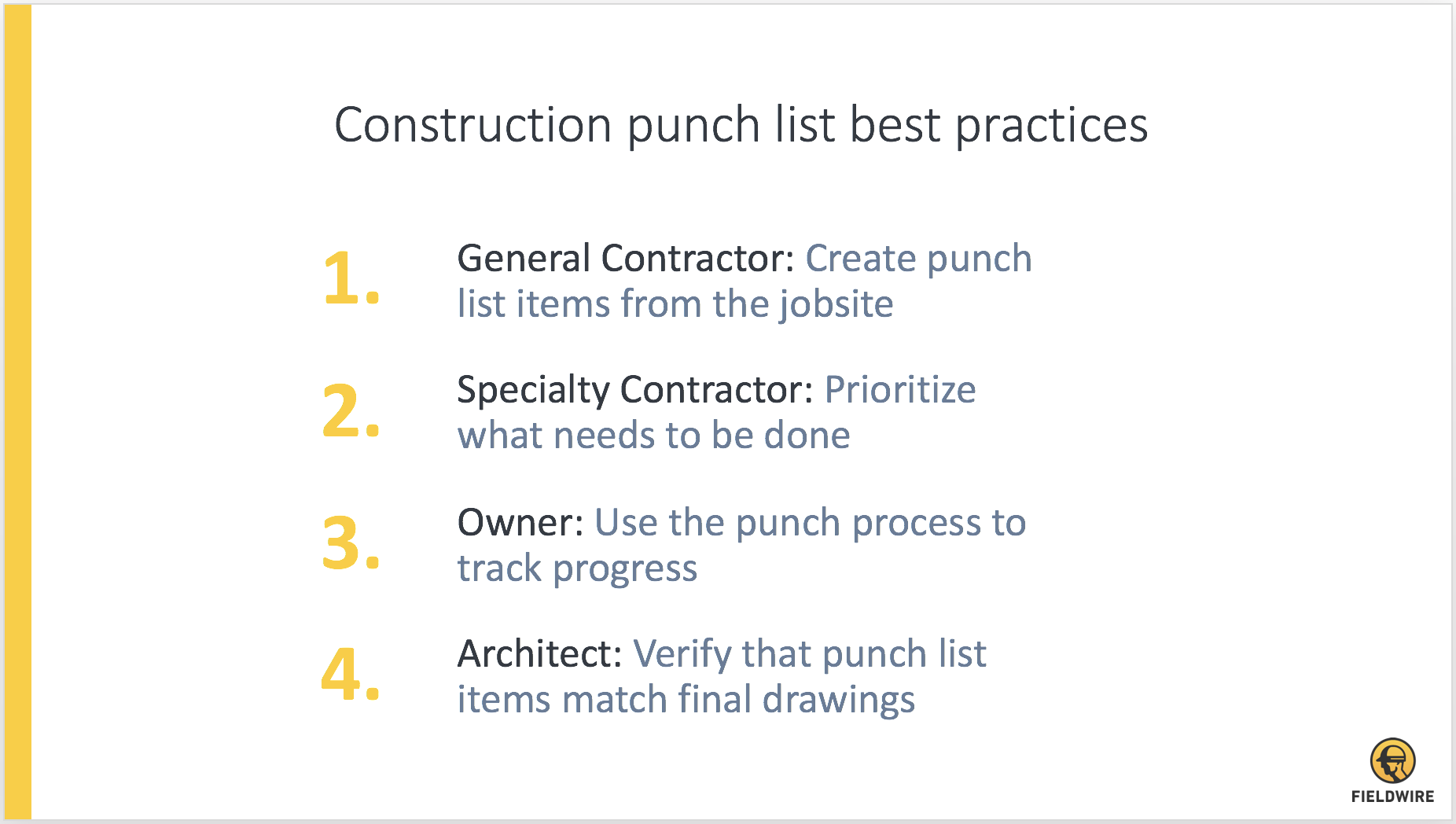 2. Specialty Contractor: Prioritize what needs to be done

The specialty contractor must resolve punch list items on a construction punch list. It is their job to get in and do the actual work in an efficient manner to streamline project close out. Specialty contractors must ensure that the work they do complies with drawing specifications set by the architect or design team to avoid unnecessary rework or conflict. For this reason, subcontractors must clearly understand what to do — when, where, and why — to stay within contract scope and budget. In one study, Bent Flyvbjerg, an expert in project management at Oxford’s business school, said: “It is estimated that nine out of ten construction mega-projects run over budget.”

Additionally, a study by the Navigant Construction Forum states “average rework on projects can cost between 7.3% and 10.9% of total construction cost (when both direct and indirect costs are included) and can cause an increase in the schedule (project delay) of approximately 9.8% of the planned project time.” One of the major causes of rework in construction, according to Jim Rogers, is workers in the field not having the information they need to resolve a contractor punch list correctly the first time. He said: “Plan changes, updates, clarifications, and submittals that occur throughout the building phase of a project create a constant challenge in terms of ensuring that the latest information gets in the hands of the people that need it in a timely manner.” For subcontractors to have access to the information they need at all times, construction punch list software like Fieldwire should be used to bring jobsite data and teams together in one place. A punch list for construction projects doesn’t have to be a hassle.

For example, when a punch list item is assigned to a specialty contractor in the field, he or she will be notified in real-time. From a smartphone or tablet, they can open the punch list item on the Fieldwire app, see the exact location of it on a plan, the man-hours required, and a due date. As they work to resolve the punch list item, the subcontractor can send messages, photos, and videos to the general contractor using the Fieldwire app to communicate progress. This way, punch list items are resolved efficiently, everyone remains on the same page, and there is no need for back-and-forth emails between the various parties to communicate change.

3. Owner: Use the punch process to track progress

The construction project owner should be present for site walkthroughs at various stages of a project — not just at the end — so they’re aware of construction pace and progress. However, a best practice for punch is to use punch list software that fosters transparent communication should make owners feel like they know site conditions before even entering it. It is an owner-specific best practice to ask the general contractor a list of questions — such as this example punch list from Succeed with Contractors — during site walkthroughs that may spark additional punch list items. A few example punch list questions from the owner include: ‘Does every outlet work properly?’ or ‘Is there adequate paint coverage?’ If the answer is no, the general contractor will need to create a new punch list item(s) for trade contractors to address.

The importance of communication between the project owner and various stakeholders was emphasized in a BSI report which said:

“Defects in the UK construction industry, many of which were the result of inefficient communication, cost an estimated £20 billion (or US $25 billion) to correct every year.”

From project start to project finish, it is the architects, designers, and engineers duty to ensure all construction meets the approved, specified drawings and everything will work as intended. They must be included in final site walkthroughs to sign-off on punchlist items and confirm that the final product matches the original drawings. If the architect/designer/engineer notices something that’s ‘not to spec’ and not listed as a punch list item, he or she needs to consult with the owner to see if they had requested a change that had not been documented.

By continually checking in with the owner to align on expectations, the final walkthrough should be painless and very minor in nature. Engineering News writes:

“Only 25% of large construction projects surveyed in KPMG’s 2015 Global Construction report were completed on time and within budget.”

Other best practices for punch lists on a jobsite

Besides the role each group we covered plays in closing out a project, there are several other major use cases of punch lists on a jobsite. They include daily box meetings where the entire project team reviews what work they need to do that day, and universal quality control to maintain a common standard across the entire project. No one should be asking “what is a punch list?” Instead, the entire team should be on the same page, and clear as to their responsibilities and expectations.

Now that we know exactly what a punch list is and its role in construction reporting, we can understand its importance and how it can become overwhelming on a big project. Luckily, Fieldwire’s punch list app adds both speed and structure to your closeout process as part of our field management platform.